“Sharing the same motivations and rules of the self interest game created a common orientation and thus a common operating system for economic actors to participate in.”  Brian Davey, Credo, 9.

For a few days I’ve been sleeping in airplanes and hotel rooms.  There is nothing in a hotel room that tells you about life.  There is a bed, a TV, and some electrical outlets.  The closest thing to life is the water piped in, and the view if there is one.  Everything non-human has been disappeared except as it appears on the breakfast, lunch or dinner plate.  “There is no there there,” as Gertrude Stein once said so famously of Oakland, (By which she meant the place that she had known had been disappeared).  What does it mean to live in a place which is no place, an abstraction made concrete (and of concrete),  a place where appetite is untethered from its context and therefore unlimited in scope and blind ferocity?

These are the places we made in the name of a certain kind of pantheon of economic Gods – in the name of Efficiency and Innovation and Growth and Jobs.  These are the names of the orthodoxy now.   It is difficult to argue with the gods.  It always has been.  These are the places that we make under the influence of our gods – hotel rooms, office buildings, airports.  They represent the ideals of our civilization.  They are clean to the point of sterility, air-conditioned,  anonymous, secure, profitable.  These, it seems, is the realm we make when the rules of the game are determined by the lowest common denominator of humanity: unmitigated self-interest. We make places that are stripped of all life and love of life.  We make places that are cold, efficient, and impersonal.  We make places that reproduce our lowest common denominator – our blind self-interest, our infinite appetite.

As I am traveling in this world of placeless hotel rooms, the  DJ Avicii, a mere boy in his 20’s but a superstar of the Electronic Dance Music scene, is dying of a drug overdose in another hotel room in Muscat, Oman.  It is a lethal world, this world, even for those who are its “winners,” and infinitely more so for the “losers.”

Why am I traveling in the karmic realm (avicii) of hotel rooms and airports?  To protect its opposite paradoxically enough.  Brian Davey’s speaks of such places:

“People living in human communities situated in specific biological communities (eco-systems) may come, over time, to recognise that the eco-system in which they live has a “balance level” of health. This is is not the same as what economists understand by equilibrium but a dynamic negotiation between the different elements beyond which “tipping points” occur and the system slips into a different state altogether. The sense of responsibility for the maintenance of a place and the way of life embodies and embeds a recognition of the need to stay back from these ecological tipping points. This is based on a keen appreciation of the needs of the whole human community, as well as the need to maintain balance in the community of species of which it is a part (the eco-system).”  Davey, 32.

What if we thought about economics in terms of looking at the whole picture of life on Earth?  What if we let economics be about our better selves – the selves that love and nurture our children without pay, that serve as volunteers in our communities, that feel  and act on our connection to the environment?  What if we advocated for a kind of economics that saw the whole picture of what it means to be alive instead of the current definition that has us fighting over scarce resources, selling ourselves to the highest bidder, bull-dozing “empty” land to make into hotel-rooms, and sacrificing our health and happiness in the name of success?

This is all to say that I am reading Brian Davey’s book Credo (available for free online) where he advocates for just such another kind of economics, and that it’s worth checking out, as well as the website for FEASTA  of which Davey is a frequent contributor.

Also here’s a picture of some lovely snowdrops – which I had never seen before – at Jody’s house.  Amazingly beautiful little things!

Thanks Chris for pulling on this thread so to speak

Perhaps these photos are just of excesses of the past, of things we label charismatic megafauna, then promptly tend to forget, whereas the bugs and bees fallen to pesticides, and the fish eaten for survival do not seem to evoke the same feelings of loss.

Wonder how many babies this female had every year…

I tore this picture from the newspaper last month and put it on the shelf behind some books, but the image didn’t let go. The sorrow it engendered seemed disproportionate. I follow the news and know that human lives and hopes and dreams are being extinguished all over. Children’s lives and hopes and dreams. Why bother about a hundred-year-old photo of some extinct animals?

They are Tasmanian tigers, or thylacines, in a zoo in about 1910. They were hunted to extinction in the wild around that time, and the last of their kind – though there are occasional unverified sightings to this day – died in captivity in 1936.

The thylacine was a marsupial. It raised its young in pouches like a kangaroo, and evidently evolved to fill a dog-shaped hole in its environment. “Convergent evolution”, zoologists call it. I guess because of some conditioned affinity for dogs, I’m more moved by those faces than I could be by any image of a dodo. See those curious, questing, intelligent eyes. And the physiognomy, so familiar and yet so strange. What a dreadful loss.

I’m not sure if we ever carried out a proper accounting for this loss, and I believe we need to – for our own well-being if nothing else. Our ancestors wouldn’t have allowed such a thing to pass without appropriate acknowledgement. Without mourning.

I’m talking here about our deep ancestors, way back when our kind still lived and died amid wonder and mystery, both as a part of Nature and apart from it. Way back before wild grasses were tamed on the silty flood plain. Before wild creatures were hobbled and roped into our enclosures. Before settlements, property, hierarchies, laws, slaves, money, taxes, royalty, God, soldiers, politicians, bureaucrats and the execution block. Before we had to indulge wealthy simpletons boasting about their plans for colonies on Mars and everyone living to 100! Before all the generations of stunted minds and lives. Back to when our distant but actually not so distant kin were strong and alert, and well aware of how deadly our gifts of fire and tools and storytelling could be for the magical web of life on which it all depended.

We could consider the thylacine just another twig snapped off the Darwinian tree, one of many. After all, those who study these things tell us that 99-point-something per cent of all species ever have gone extinct, that’s how evolution works. So… chill. But no. Tug a thread, and then another, and pretty soon the whole fabric comes loose. That must have been clear as daylight to our ancient kin, for whom every waking morning was a reminder of how blessed they were and how dependent on Nature’s grace. It was clear to Shakespeare (“For nothing so vile that on the earth doth live / But to the earth some special good doth give”) and it’s clear to a lot of us today. It’s an important truth yet one that’s glossed over in the narratives that drive our global, urban-agro-industrial culture. So the threads go on being tugged out, one after another.

Scholars of the Sixth Mass Extinction report that species are now blinking out at between 100 and 10,000 times the background rate of extinction. No time to mourn them all, of course. In fact, no time to mourn any of them. Our culture of extraction and consumption has to keep pressing forward, eliminating obstacles along the way.

Stop now and it all collapses.

Carry on and it all collapses.

But at least let’s account for what we’ve done and where we’re at. Even though it hurts. Our deep ancestors, if they came among us now, would surely look at us – their own distant progeny – with eyes of affection, and admiration, and sadness. They’d know full well the price that is paid for injuring Nature, and they’d understand the thylacine can’t be brought back. The thread can’t be pushed back into the fabric, no matter how hard we might wish that.

I believe they’d also consider it the responsibility of our kind, once Nature’s favourite child, to face up to what’s done, to take on that burden – not bury it – then live with it as best we can. 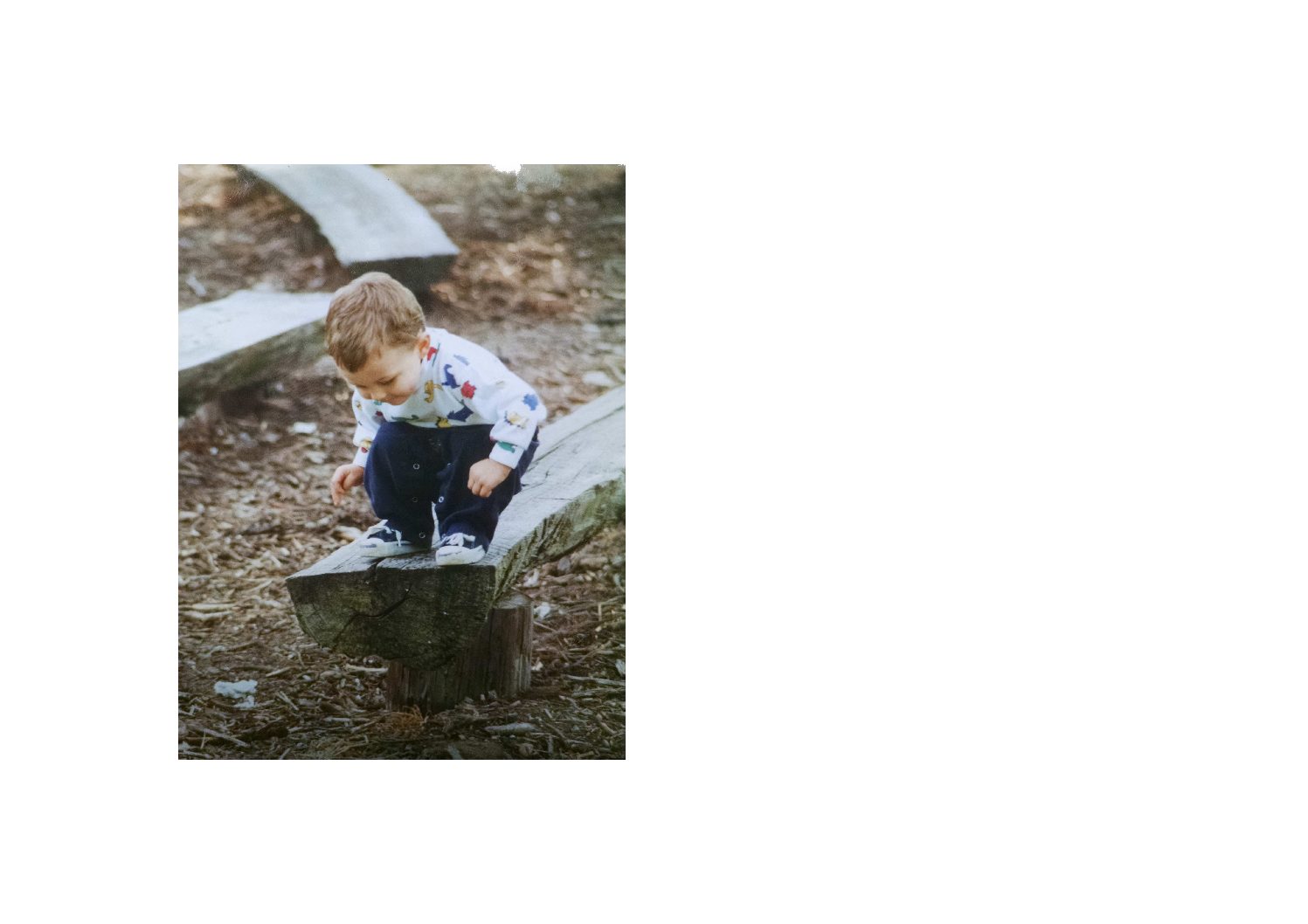 I took this photo of my son, 18 months old and poised to jump off the bench to the ground below.  The picture captured his fearless love of adventure so clearly.  At the age of two he climbed up to the top bunk and jumped off into a bin of stuffed animals below.  He is still adventurous but lately I’ve come to realize that he isn’t without fear or doubts.  In other words, he is a normal young man.  I’d been thinking about gender roles when I came across a recent article by Tim Winton discussing how toxic masculinity is shackling men to misogyny. “I don’t have any grand theory about masculinity,” he wrote, “but I know a bit about boys.”

END_OF_DOCUMENT_TOKEN_TO_BE_REPLACED

The birds sang in the bamboo patch and a soft wind blew across the green valley, and so  it was with a twinge of reluctance that I embarked on my trip to Saint Louis, Missouri to attend the SARE (Sustainable Agriculture Research and Education) conference. SARE is a grant program under the US Department of Agriculture’s National Institute for Food and Agriculture, for which I have the privilege of serving as an advisory council-member. END_OF_DOCUMENT_TOKEN_TO_BE_REPLACED

This is a place to talk and think together about how we can see ourselves and the world differently.  Please join in!

How can we re-think (and re-do) the relationship between the human and the not-human, nature and not-nature, the spiritual and the worldly, between you and me? How can we  find and nurture commonality (same-ness amid difference) not just among humans, but among humans and non-humans? How might we assemble the bits and pieces of a way of life with staying power?